Watch for the Subtle Signs of Glaucoma in Cats

Cats are at risk for some of the same ailments as humans, and glaucoma is no exception. The only difference is that glaucoma in cats is harder to treat. Too often, owners don’t realize something is wrong until it’s too late.

Glaucoma that goes untreated can eventually result in total blindness. Learning about glaucoma and its associated symptoms is the first step in protecting your kitty and their sight.

The two types of glaucoma

Glaucoma is an eye disease that affects the optic nerve. Fluid buildup applies constant pressure within the eye and slowly deteriorates the optic nerve’s ability to function. If the condition is left untreated, cats suffering from glaucoma may experience varying degrees of vision loss and possibly even blindness. The type of glaucoma your cat might have depends on what caused it, ranging from underdeveloped tear ducts at birth, to eye infections later in their life.

Glaucoma in cats is classified as either primary or secondary. Primary glaucoma occurs when a cat’s tear ducts aren’t properly developed. This is a condition some cats are born with. It can’t be prevented but might respond to treatment if it’s detected early enough. Tear ducts with the wrong filtration angles are incapable of draining away excess fluid, causing a buildup inside the eye. Constant pressure on the optic nerve leads to primary glaucoma and eventual vision loss.

The other type, secondary glaucoma, is more common in cats. Similar to primary glaucoma, the disease occurs when excessive fluid presses on the optic nerve. However, secondary glaucoma is often the result of many different causes such as eye infections, eye tumors, inflammation or blood clots from an injury. Some of these causes are preventable, so it’s important for owners to closely monitor their cats whenever they go outside or get into a scuffle with other pets. 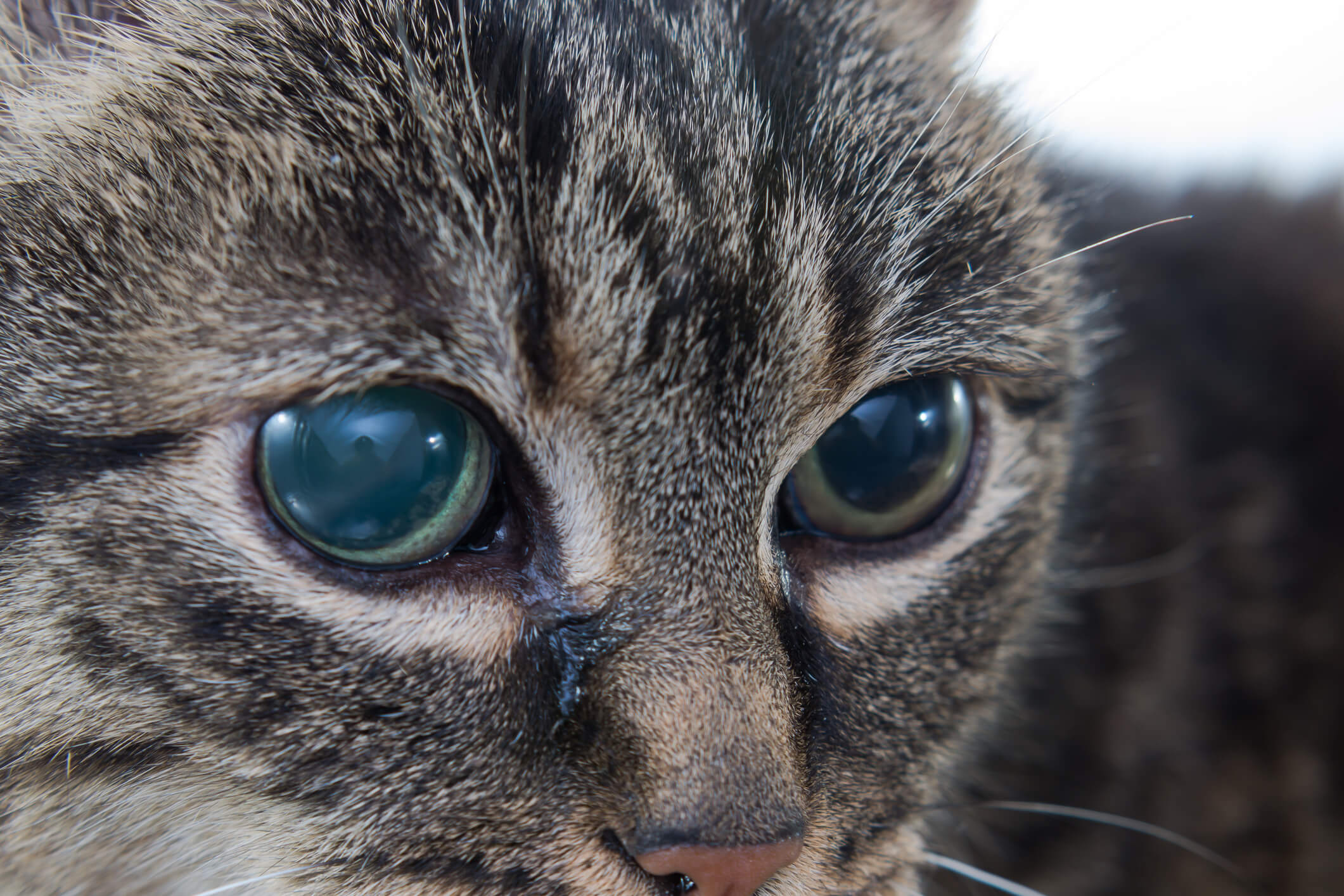 Symptoms to look for

Primary and secondary glaucoma can be very hard to spot in cats. Although glaucoma causes a great deal of discomfort, cats are masters at hiding their pain. Additionally, many symptoms go undetected if you don’t know how to look for them. The warning signs are so subtle, it’s no wonder cats live with glaucoma for quite some time before anything is done about it! You’ll want to schedule an examination with your vet the second you notice something’s not right with your kitty’s eyes.

For the most part, cats with either primary or secondary glaucoma exhibit the same symptoms. The most notable symptom is high pressure inside the eye, which requires special equipment at the vet’s office to detect. However, owners who look closely might notice symptoms including reddened blood vessels in the whites of the eyes and cloudiness over the pupil and iris.

Some symptoms will vary slightly depending on the type of glaucoma your cat has. Cats with primary glaucoma might experience:

Any combination of these symptoms may be present, but a cat displaying only one is still cause for concern.

Secondary glaucoma presents itself in many different ways. Additional symptoms may include one or several of the following:

Owners will probably notice a change in their cat’s behavior, too. If your cat is pressing their head against walls or furniture, they might be attempting to relieve the pressure in their head caused by fluid buildup. Cats with glaucoma may also lose their appetite or desire to play with owners.

Why owners should act fast

Glaucoma causes irreversible damage to the eyes. The sooner you get it treated, the better chance your cat has of preserving their vision. Primary glaucoma, in particular, requires frequent checkups with a vet. This is because primary glaucoma that’s present in one eye is likely to spread to the other. Catching glaucoma early on is key, so your cat’s vet can prescribe treatment that slows the progression of vision loss.

The second danger of glaucoma is that symptoms largely fly under the radar. Unfortunately, many cat owners don’t realize the extent of the damage until their poor kitties show obvious signs of severe vision loss. By the time owners take notice of the problem, little can be done to stop their cat from going completely blind. Treatments like medication and surgery are available, but the best way to protect your cat is with regular examinations, even if you think nothing’s wrong.

If you think your cat might have glaucoma, consult a veterinarian right away. Prevention is key for diseases that have irreversible effects on a cat’s health. Furry companions can’t speak on what’s happening to them, so owners must recognize when it’s time to seek medical help.

One question many pet parents ask is, “Am I doing enough for my pet?” Your furry friend may seem fine, but owners are often left wondering if there’s more they could do to support their pet’s general health. The simple answer is yes—our fur babies have a complex network of bodily systems that require daily maintenance for a long, healthy and comfortable life.

8 Ways Pets Can Improve Your Health

Before bringing a fur baby home, potential owners understandably want to weigh the pros and cons of pet ownership. Pets require so much time and effort, but keep in mind you have plenty to gain in return.